The governments of China and Singapore have combined their expertise and finances to develop the future city, which has a planned population of 350,000 and includes schools, medical facilities and business districts.

Foreign companies such as Japan’s Hitachi and Dutch electronics giant Philips will provide green technology for the development, where buildings will be insulated and have double glazed windows to increase energy efficiency.

Top leaders in Beijing also hope the project will serve as a model for a long term solution to the country’s ballooning urban population, which is putting enormous pressure on already strained water and energy resources.

Nearly two thirds of household waste will be recycled and 20 percent of the city’s power will come from renewable energy sources such as wind and solar, with the rest coming from other sources such as highly polluting coal.

Treated sewage will be channeled into a lake which will supplement water supplies for local communities.

“Eco-cities are needed because China is facing a huge challenge of pollution,” said Hiroaki Suzuki, a top specialist in the Finance, Economic, and Urban Department of the World Bank, which is assisting on the project. “China’s serious pollution problems do not mean that it cannot develop an eco-city.”

China is undergoing an unprecedented urbanization process as hundreds of millions of people have headed too fast, growing metropolitan areas since the nation’s economy embarked on a fast paced growth track more than 30 years ago.

To handle the massive influx of people, China may need to invest up to US $3.6 trillion dollars in urban infrastructure by 2020, state media said, citing a report by the state think tank China Development Research Foundation.

Greenpeace supports the development and the making of an “ecological city” in China as a way of handling urban overcrowding , which it says could prevent China from curbing from its world leading carbon emissions and meeting its ambitious energy targets. 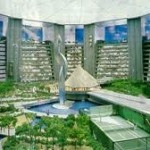