Gerard Depardieu’s entourage has said he tried to urinate into a bottle “as discreetly as possible” while on a flight, and said he was “sorry” to have spilt some on the plane’s carpet.

The French actor has had more than his fair share of controversy when he was caught short on a Paris to Dublin flight after the seat belt sign had been switched on for take-off. With the lavatories closed, the 62-year-old called out “I need to piss, I need to piss”. But the cabin crew said no.

Given his “irrepressible need”, his two travel companions, including the French actor Edouard Baer, offered him an empty bottle as a last resort.

It is understood the movie star got out of his seat and tried to relieve himself into an empty bottle at the back of the plane.

A little urine was spilt on the floor, which the actor offered to clean up himself, saying he was “sorry” for the inconvenience caused, they said.

The real-life incident failed to raise a laugh on Tuesday from irate passengers of the Dublin-based City Jet airline; they were told Mr Depardieu’s antics meant the plane would be grounded for two hours while staff cleaned the carpet.

The French star, who was traveling with two companions, was thrown off the flight with his luggage and told to book another one.

Friends of the actor said he was “completely sober” but desperate to relieve himself. At first he was told he had 15 minutes to wait, but then due to congestion on the runway, he was informed he would have to endure another 20 minutes, they said. 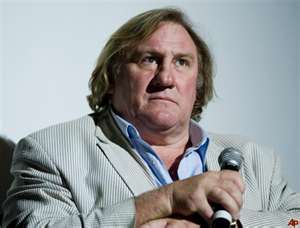