The former American Idol Adam Lambert to showcase the stage with legendary rock band, Queen this summer at Knebworth Park for Sonisphere 2012.

Queen’s Brian May and Roger Taylor have confirmed that the American singer-songwriter will perform vocals for the band’s headline set on the second day of the Sonisphere 2012 rock festival. The concert takes place on July 7 at Knebworth Park.

After their brief meeting on American Idol, the potent chemistry between Queen and Lambert finally broke the surface when, at the invitation of the band, Lambert joined the same for the closing showcase at the recent MTV Europe Awards, where Queen were present to collect their Global Icon award.

The Sonisphere 2012 Knebworth stage will at last provide an eager public the opportunity to see May, Taylor and Lambert delve deeper into exploring their very evident artistic appreciation of one another.

Adam, 30, has sung with Queen before. In 2009 he performed We Are the Champions on the US reality show that made his name and then last November he sang an eight-minute set at the MTV Europe Awards to celebrate Queen’s Global Icon Award. 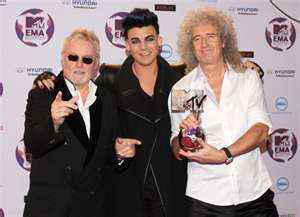