Jeremy Lin is the NBA’s first American-born player of Chinese or Taiwanese descent.

His earlier exploits as a basketball player has not been good because he was not given enough opportunity to showcase his talents.

Why this is so? Most probably because of stereotyping that plays an influencing role in the selection process for athletes competing in the field.

People don’t expect Asian Americans to be that good at basketball. In the words of U.S. Secretary of Education Arne Duncan, “This is classic low expectations and, frankly, stereotyping.”

No one has expected that the not drafted Asian American from Harvard excelling for the storied New York Knicks in the NBA’s most famous arena is unlikely to excel in a league mostly dominated by African Americans.

“Lin is changing perceptions of Asian Americans, in ways that both reinforce and deeply challenge existing stereotypes,” said Thad Williamson, a University of Richmond professor of leadership studies.

Lin is aware of the stereotypes and says he perhaps can open doors to basketball previously unknown to Asian Americans, similar to how Tiger Woods introduced golf to more people.

“The more we can do to break those down every day, the better we’ll become,” said Lin.
Knicks legend and TV analyst Walt Frazier has this to say, “This league is dominated by African Americans. What are the odds of an Asian guy coming on and having this impact? It’s amazing. It’s inexplicable.”

Since New York Knicks coach Mike D’Antoni gave Lin his chance to jumpstart his struggling team, the Knicks are 7-0, including 6-0 with Lin as a starter.

The Knicks has moved from 10th to eighth in the Eastern Conference standings, revitalizing its season and re-energizing a Madison Square Garden crowd that has not enjoyed an NBA title since 1973.

In his last seven games, Lin has averaged 24.4 points, 9.1 assists and 4.0 rebounds, filling Knicks fans with joy and hope and replacing frustration that existed for the last decade.

Lin, as a player has shown that he can not only compete but excel against the world’s best players in the league. 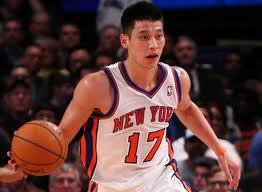