Spaniard Alvaro Quiros, the overnight leader, won the title by two shots after a 67 left him at 19 under.

England’s Luke Donald became the first man to win the US and European money lists in one year after finishing third at the Dubai World Championship.

The world number one needed a top-nine finish to complete the feat and shot a bogey-free 66 for a 16 under total.

Rory McIlroy, who had to win the Dubai event for a chance of the money list, closed with a 71, 10 shots adrift.

He won four tournaments, including the World Golf Championship Match Play event and the European Tour’s flagship event, the PGA Championship at Wentworth, which also saw him crowned world number one.

“There’s a lot still to achieve,” Donald said, after being presented with the lavish Race to Dubai trophy. “The beauty of this game is that you are always looking for ways to improve.” 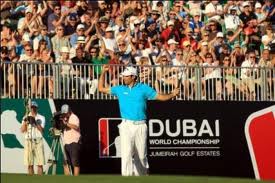