Anderson Cooper came out by giving permission for friend Andrew Sullivan, who is openly gay, to print an email exchange between them on the Daily Beast.

In it he said: ‘The fact is, I’m gay, always have been, always will be, and I couldn’t be any more happy, comfortable with myself, and proud.

‘I have always been very open and honest about this part of my life with my friends, my family, and my colleagues.

He is also one of the most high profile people to come out in recent years.

Cooper’s sexuality has long been an open secret in TV circles, but for him to state it publicly is a brave and bold move.

The CNN news anchor said that he did not want people to think he is ‘trying to hide something’ and that he is ‘proud’ of who he is.

‘In a perfect world, I don’t think it’s anyone else’s business, but I do think there is value in standing up and being counted.’

His going public will be old news to some, especially those who know him in New York where he has been a regular fixture at gay pride events for years.

Anderson is the youngest of four sons of Gloria Vanderbilt and writer Wyatt Emory Cooper, who died of heart disease in January 1978 at age 50.

Cooper’s disclosure is the latest twist in his eventful life as one of the Vanderbilt family, one of the most famous dynasties America has ever seen.

His brother Carter, a Princeton graduate, killed himself at the age of 23 by jumping off the family’s New York penthouse balcony two decades ago.

Cooper and his 87-year-old mother, former fashion designer, spoke about the tragedy for the first time last September in his talk show ‘Anderson’.

At the time he was praised for talking in such an honest way about suicide, and his latest disclosure is likely to earn him similar plaudits. 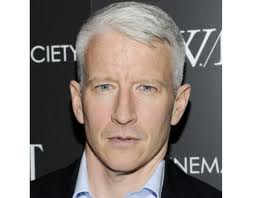