Trichologists have discovered that hair follicles on the scalp can become trapped in a resting state where they do not grow new hair, leading to thinning.

They now claim to have identified a way of waking the follicles up again to help restore a fuller head of hair to people who are going bald.

Typically hair strands grow continually for a period of up to four years before the follicles switch to a dormant state and the strand of hair falls out.

During this dormant period, stem cells in the skin begin the processes needed to grow new hair.

In people who are going bald, however, this process can stall and new hair does not form.
Scientists working with Dr. Bruno Bernard, head of hair biology at L’Oreal in Paris believe they have identified why this happens.

They have found two reservoirs of stem cells help are responsible for creating new hair, one that is near the surface of the skin and one that is deeper in the layers of the skin.

The bottom reservoir of stem cells are in an environment that is low in oxygen, known as hypoxia, which helps to keep the stem cells in a healthy condition.

Dr. Bernard, who presented the findings at the European Hair Research society in Barcelona, said that in people who are going bald, the levels of oxygen around these stem cells have changed, meaning they work less efficiently and so preventing the creating of new hair.

‘The stem cells can sense the amount of oxygen around them,’ he said. ‘We have identified molecules that mimic the effect of hypoxia on the stem cells. It means we can push the empty hair follicles to make new hair fibers faster.’

Dr. Bernard, who carried out the research said: ‘Hair follicles exist in two stable states, either an active state or a dormant state. From time to time, they will jump from one state to another.

‘Some of the follicles are just resting in the dormant state and are waiting for the right signal to make new hair. They are in a latency period. If you can reduce this latency period, you will have more.

‘We have identified a compound and we are going to make a formulation of it that can be applied to the scalp to wake up the sleeping hair follicles.’

Up to half of all men suffer from androgenic alopecia, the most common cause of hair loss and thinning in humans. It is estimated that around eight million women in Britain also suffer excessive hair loss to some degree. 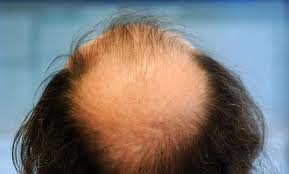