Andy Murray secured his place in the second week of Wimbledon by beating Croatia’s Ivan Ljubicic.

The number 33, Ljubicic remains a player capable of threatening the very best, in large part because of his world-class serve.

Murray has now put himself in a very good position, once again after he has beaten a more experienced player of Ljubicic and he did just that and showed signs that he could go all the way.

World number four Murray will face French 17th seed Richard Gasquet on Monday for a place in the quarter-finals.

Andy Roddick concedes a 7-6 (7/2), 7-6 (7/2), 6-4 loss to Spain’s Feliciano Lopez. Roddick had won all seven of his previous meetings with Lopez, but the Spaniard, twice a quarter-finalist, served brilliantly and stopped Roddick establishing his all-consuming power game.

The eighth seed Roddick, beloved by the Wimbledon crowd after his epic 2009 final defeat by Roger Federer, looked a shadow of his former self. He admits that it has occurred to him that he may never get to lift the championship trophy.

Roddick, 28, has now failed to get past the fourth round in three of his last four visits to Wimbledon.

The world number 44, Lopez’s reward for defeating Roddick is a clash against either French ninth seed Gael Monfils or Lukasz Kubot of Poland for a quarter-final place. 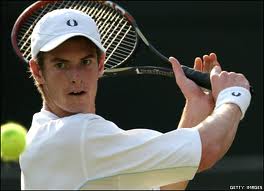