Asians reportedly have lower risk of developing Alzheimer’s disease compared to those living in Western countries based on studies in China and Taiwan.

But when Asians move to Western countries, they are most likely to develop Alzheimer’s. A good example is that, Alzheimer’s is more common among Japanese living in Hawaii than those living in their home country, Japan.

Despite the advance of medical science, there is no cure yet for Alzheimer’s. The current ‘treatment’ is still through caregiving and make the remaining years of patient with Alzheimer’s comfortable.

Unlike in industrialized countries, nursing homes are not available in most parts of Asia, hence, the basic responsibility for caregiving and management of patient with Alzheimer’s rests with the family.

Among themselves in the family, they choose one of who would be responsible for the task of caregiving of the patient with Azheimer’s. However, as the disease advances to a child like behavior, the patient could be completely dependent on the caregiver in terms of being fed, bathed and dressed and this would certainly give a toll to the caregiver’s miserable routine and usually they get fed up.

In most cases, Alzheimers is more agonizing for the caregiver than for the patient. It is not only physically demanding but also emotionally draining.

Studies in the United States found that caregivers of Alzheimer’s patients, compared to other people their age, have 70 percent more physician visits, 50 percent more likely to suffer depression and 40 percent use more medications.

Professor Kua Ee Heok, a consultant psychiatrist from the National University of Singapore, suggests that caregivers should be given a break by taking over caregiving responsibilities for a few days and taking the patients with Azheimer’s to a day care center where trained nurses could take care of them.

Although the disease can occur at any age, even as young as 40 years old, it is more common on the elderly. Aside from advancing age, genes almost certainly play a role in the disease.

Charles Colton, British churchman and writer wrote: “Body and mind like man and wife, do not always agree to die together.” Such is the case of Alzheimer’s. Until today, science is still baffled why the brain dies before the body, leading to the mind snatching disease. 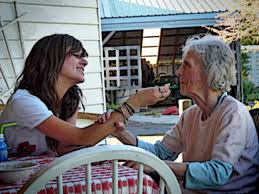