Andy Murray won the Cincinnati Masters, 6-4, 3-0, as the world’s top-ranked player, Novak Djokovic was forced to retire in the second set Sunday because of a sore right shoulder.

Djokovic, chasing an unprecedented sixth Masters Series title this season, had struggled from the outset with Murray breaking his first service game.

The Serb talked about feeling exhausted in Cincinnati, coming off his record fifth Masters series title in Montreal last week. He said his serving shoulder had bothered him for about the last 10 days, but he’d been able to manage the soreness and keep winning.

The world no. 1, showed some discomfort with his shoulder but was still able to break back to 3-3 and bring the crowd to life, in anticipation of a real contest.

With his serve registering only in double-digits and his forehand limited by the pain, Djokovic realized he couldn’t compete. He said he would have retired even if the rain had temporarily stopped the match.

It was the world number four’s second title in Cincinnati after he also beat Djokovic in the 2008 final and his seventh overall Masters crown and a major boost to his preparations for the U.S. Open. 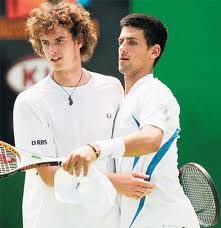