In China, a lingering preference for boys coupled with strict controls on the number of births have helped create a lucrative black market in children.

Police recently announced that they had rescued 89 babies from child traffickers, and the deputy director of the Public Security Ministry assailed what he called the practice of “buying and selling children in this country.”

China’s state controlled media ignored or suppressed news about government sanctioned kidnappings in Longhui and other regions until this May, when Caixin, an intrepid Chinese magazine, prompted an official inquiry.

Yuan Xinquan was caught by surprise one morning in 2005. Then a new father at the age of 19, he was holding his 52 day old daughter at a bus stop when a half dozen men sprang from a government van and demanded his marriage certificate.

He did not have one, he and his daughter’s mother were below the legal age for marriage. Nor did he have 6,000 renminbi, then about US$ 745 dollars, to pay the fine he said they demanded. He was left with a plastic bag holding her baby clothes and some powdered formula.

“They are pirates,” he said. Nearly six years later, he still hopes to relay a message to his daughter, “Please come home as soon as possible.”

But parents in Longhui say that in their case, it was the local government officials who treated babies as a source of revenue, routinely imposing fines of US$ 1,000 dollars or more, five times as much as an average local family’s yearly income. If parents could not pay, the babies were illegally taken from their families often put up for adoption by foreigners.

At least 16 children were seized by family planning officials between 1999 and late 2006 in Longhui County, a rural area in Hunan province parents and other residents said.

The practice came to an end in 2006, parents said, only after an 8 month old boy fell from the second floor balcony of a local family planning office as officials tried to pluck him from his mother’s arms.

But rather than helping trace and recover seized children, parents say, the authorities are punishing those who speak out.

Lillan Zhang, the director of China Adoption With Love, based in Boston, said the agency had found adoptive parents in 2006 for six Chinese children for adoption from the government run Shaoyang orphanage.

The Chinese authorities certified in each case that the child was eligible for adoption, she said. Foreign parents who adopt must donate about US$ 5,400 dollars to the orphanage.

The scandal also has raised some questions on moral grounds and legal issues regarding foreigners adopting Chinese children who were falsely and deliberately depicted as orphaned by unscrupulous government officials. 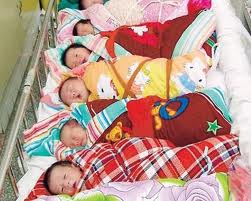