Anorexia nervosa is characterized by self starvation and excessive weight loss. It is a psychiatric disorder once known as “Golden Girl Syndrome” because it struck primarily rich, white, well educated young Western women, it was first documented in Japan in the 1960s.

Today, eating disorders like anorexia affect the lives of as many as three percent of Asian girls and young women. About 95 percent of the people who have this disorder are females, particularly teenagers.

Anorexia nervosa may be mild and transient or severe and long lasting. Death rates as high as 10 to 20 percent have been reported.

The reason some people get anorexia nervosa is not known. Anorexics may believe they would be happier and more successful if they were thin. They want everything in their lives to be perfect.

People who have this disorder are usually good students. They are involved in many school and community activities. They blame themselves if they don’t get perfect grades, or if other things in life are not perfect.

According to the American Academy of Family Physicians, anorexia nervosa is an eating disorder marked by a morbid fear of getting fat, the deliberate avoidance of food and severe weight loss.

In recent years, the self starvation syndrome has spread to women of all socioeconomic and ethnic backgrounds in Asia. Cases have also been reported though at more lower rates in China.

Anorexia nervosa, a psychiatric obsession to be thin has even surfaced among the affluent elite in countries where hunger remains a problem, including India and Pakistan.

An anorexic’s image of her body is often so distorted that she avoid looking at herself in the mirror or may exercise extensively.

Half of the people who have anorexia nervosa binge and then purge by vomiting or taking laxatives and diuretics. The other half simply restrict the amount of food they eat.

Anorexia who become very thin tend to remain active, even pursuing vigorous exercise programs. Curiously enough they don’t have symptoms of nutritional deficiencies and are surprisingly free of infections.

Depression is common, and people who have this eating disorder frequently lie about how much they have eaten and conceal their vomiting and their peculiar dietary habits.

If you suspect a member of your family or your friend of having anorexia nervosa, help her or him seek treatment urgently since there’s a better chance of recovery with early treatment.

“Treatment involves more than changing the person’s eating habits,” Dr. Dr. Ken Ung Eng Khaen, a psychiatrist said. Anorexia patients often need counseling for a year or more so they can work on changing the feelings that are causing their eating problems.

These feelings may be about their weight, their family problems or their problems about self esteem. Some anorexia patients are helped by taking medicine that makes them less depressed. These medicines, however, are prescribe by a doctor and are used along with counseling. 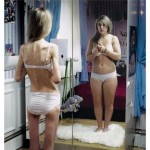