Two Russian born researchers share the physics Nobel for their groundbreaking experiments with graphene, which is a sheet of carbon atoms join together in a pattern resembles a chicken wire.

Andre Geim and Konstatin Novoselov of the University of Manchester in England used scotch tape to rip off flakes of graphene from chunks of graphite, the stuff of pencil leads.

That achievement, reported just six years ago, opened the door to studying what scientists say should be a versatile building blocks for electronics and strong materials.

“It has all the potential to change your life in the same way that plastics did,” Geim, 51, said. Could graphene be the next plastic? Maybe so, says one of two scientists who won a Nobel Prize for isolating and studying it.

It is the thinnest and strongest material known to mankind, no thicker than a single atom and 100 times tougher than steel.

Graphene’s electrical properties mean it might make for faster transistors, key components of electronic circuits, and so lead to better computers, the Nobel committee says.

As a single layer of carbon atoms it’s tiny, which could pay off in more powerful cellphones, several scientists said.

Its tremendous strength could produce new composite materials that are super strong and lightweight, for use in building airplanes, cars and satellites, the committee said.

And since it’s practically transparent, it could lead to see through touch screens and maybe solar cells, the committee says. It might also pay off for big TV screens.

Hence, with its physical property of graphene being a super thin and a super strong material scientists consider the same that it could be, the super material component of the future. 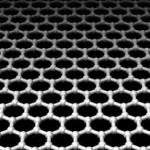