The Arnold Schwarzenegger – Maria Shriver split would be the most expensive celebrity breakups if they divorced eventually and wife Maria Shriver would end up a multi million richer which is estimated between US$ 200 to US$ 400 million dollars.

Should Shriver divorce Schwarzenegger, she could stand to have a much larger claim than the last huge celebrity divorce of Tiger Woods – Elin Nordegren‘s US$ 100 million dollars pay-out.

The couple allegedly has a prenuptial agreement, since they have been married for almost 25 years and the marriage failed amidst Schwarzenegger ’s infidelity, the document might not be applicable.

This would call for the fortune to be split evenly, which Maria and her lawyer Laura Wasser would aim for.

The main reason most probably why Schwarzenegger set aside his movie commitments it’s because it could directly affect his earnings that would end up to be part of the claim. 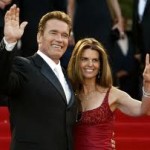