Lauren Alaina was nervous on stage as she was waiting for Ryan Seacrest’s announcement if she made it to the finale, she was a little shock upon learning that she did, because she never expected to be in the top two.

She went on to say that, “I messed up on my performance and I was unsure what was going to happen. I didn’t think I was going to make the top two. But I’m so glad that I did.”

With her win and Haley Reinhart elimination, the public has to see two young country crooners competing each other in the finale.

Lauren sure is happy she did it with Scotty McCreery, as she goes on to share “It’s like things just fell into place one by one and now there’s two young ones in the top two. It’s just like unbelievable.” 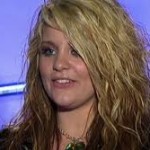