Arnold Schwarzenegger and Maria Shriver are now seen wearing their wedding rings for the first time after the latter filed for divorce citing ‘irreconcilable differences’ and asked for joint physical and legal custody of their youngest children, Patrick and Christopher.

Shriver, 56, was quick to remove her wedding ring after her husband of 25 years Schwarzenegger, admitted to fathering a secret love child with their housekeeper Mildred Baena.

Recently, Shriver was spotted wearing what looked suspiciously like her wedding ring for the first time since June of last year.

The body builder icon who was also sporting his wedding band again today, has apparently been showering Shriver with gifts.

Shriver filed for divorce in July but appears to be reconsidering the move due to a number of factors, including her Catholic faith and Schwarzenegger’s attempts to woo her back.

Rumors of a reconciliation were imminent when Schwarzenegger was seen out with his wedding ring.

Arnold and Maria were said to have spent a happy Christmas together with their children Katherine, 22, Christina, 20, Patrick, 17 and Christopher, 14.

Since announcing their split, the couple have been spotted with each other frequently and remained amicable for the sake of their children. 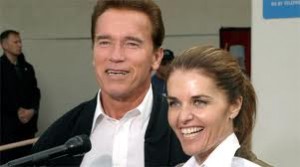