Researchers have discovered that the entire generations of newly born harp seal pups dying due to their disappearing habitat.

Harp seal pups off the coast of eastern Canada are dying at alarming rates due to a loss of winter ice cover, according to US scientists who questioned if the population will be able to recover.

According to the study by researchers at Duke University shows that seasonal ice cover in the harp seal breeding regions of the North Atlantic Ocean has declined about six percent per decade since 1979, when satellite data began.

Researchers looked at satellite images of winter ice from 1992 to 2010 in the Gulf of St. Lawrence, a prime breeding region off the east coast of Canada.

They compared stranding rates to records of a climate phenomenon known as the North Atlantic Oscillation (NAO), which controls the intensity and track of westerly winds and storms and exerts a major influence on sea ice formation and to yearly reports of dead seal pups strandings in the region.

“Entire year-classes may be disappearing from the population in low ice years, essentially all of the pups die,” according to co-author David Johnston, a research scientist at the Duke University Marine Lab. “It calls into question the resilience of the population.”

While harp seals have adapted to the earlier spring melts in recent years by developing shorter 12-day nursing periods, it remains unclear if their population can sustain itself against sea ices losses over time.

However, they found out that years of weaker NAO and lighter ice cover showed higher death rates among seal pups.

The team also looked back at data from 1950 to 1972 which showed that NAO weather changes were tied to big declines in the seal population, followed by period of recovery from 1973 to 2000.

“As a species, they’re well suited to deal with natural short-term shifts in climate, but our research suggests they may not be well adapted to absorb the effects of short-term variability combined with longer-term climate change and other human influences such as hunting and by-catch,” Johnston said.

The study was published in the open access science journal PLoS ONE. 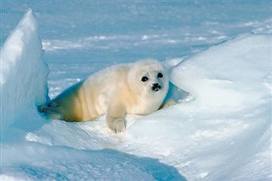