Julian Assange sought political asylum in the Ecuadorian embassy in London on Tuesday, in a dramatic bid to avoid extradition to Sweden over allegations of rape and sexual assault.

Two female ex-Wikileaks volunteers alleged in 2010 that he had attacked them while he was in Stockholm to give a lecture. No charges have been filed.

Mr. Assange claims the sex was consensual and that the allegations are politically motivated.

He made the bid, he said, because he was not prepared to go to Sweden under the terms in which he believed he would be held there.

‘The Swedes announced publicly that they would detain me in prison, without charge, while they continued their so-called investigation,’ he said.

The Wikileaks founder fears if he is sent to Sweden it could lead to him being sent to the United States to face charges over Wikileaks and that he could face the death penalty.

WikiLeaks enraged Washington by releasing a flood of classified U.S. information about the wars in Iraq and Afghanistan, as well as more than 250,000 classified U.S. diplomatic cables that embarrassed a slew of governments.

Earlier, Ecuador’s president Rafael Correa said his government would take its time in deciding whether to grant asylum to the Australian anti-secrecy campaigner.

The Ecuadorian leftist leader, who has often been at odds with Washington, said his government was studying Assange’s claim that he could be extradited from Sweden to the United States on political grounds and possibly face a death sentence once convicted.

Assange will remain inside the embassy while Ecuador considers his request, a process that could take “hours or days”, a spokesman for the whistleblower website said Thursday.

He said he had mounted his bid because his native Australia had made an ‘effective declaration of abandonment’ by refusing to intervene in his planned extradition and had done nothing to protect him, a charge the government has denied.

According to Britain’s Foreign Office Assange was ‘beyond the reach of the police’ because he was still on diplomatic territory.

British police said on Wednesday that because he was no longer staying at his designated bail address, Assange had breached his bail conditions and was now subject to arrest if he left the embassy. 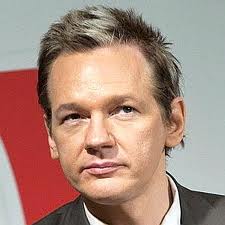