‘Sustainable Development Goals’ will replace the UN’s Millennium Development Goals from 2015, although defining the aim will be left for future talks, a process likely to be long and fiercely fought.

Despite the demands of developing nations for US$ 30 billion in aid, the text stipulated no funding figures to achieve sustainability goals.

The strategy also promotes the green economy, a concept that breaks new ground in official UN terminology but is viewed suspiciously by many developing economies.

‘It will guide us, all of us, towards a sustainable path. It is now our responsibility to build on it.’

US Secretary of State Hillary Clinton said the document ‘marks a real advance for sustainable development. We know this is one of the most pressing matters of our time.’

While Brazilian President Dilma Rousseff told a press conference that Brazil, the host country, had secured the compromise after months of haggling.

‘With this document, nations move forward. We cannot allow anyone to remain behind. The next conference will have to be a leap forward.’

But critics branded the plan a cruel failure, saying it had been gutted of ambition by national interests.

‘It’s a demonstration of political impotence, of system paralysis, and it makes me feel pessimistic about the system’s ability to deliver,’ Laurence Tubiana, director of a French think tank, the Institute for Sustainable Development and International Relations (IDDRI), said in an interview.

‘The two defining challenges we face today are eradicating global poverty and managing the risks of climate change,’ said British economist Lord Nicholas Stern, author of a landmark study into the costs of global warming.

‘But the conference has failed to acknowledge the compelling evidence about the scale and urgency of action required.’

‘The only people dancing in Rio tonight will be those who continue to benefit from a broken economic model that puts profit ahead of people and planet,’ said Asad Rehman of Friends of the Earth.

According to Greenpeace’s executive director, Kumi Naidoo: ‘We must now work together to form a movement to tackle the equity, ecology and economic crises being forced on our children. The only outcome of this summit is justifiable anger, an anger that we must turn into action.’

The UN Secretary General had named the Conference on Sustainable Development as the cornerstone of his plan for fairer, cleaner growth, the ‘No. 1 priority’ of his tenure.

But talk of a summit that would supposedly draw as many 130 heads of state or government to give a push to his goals which was way off the mark, only less than half instead of the UN’s roll call of countries sent their leaders, with the remainder represented by deputies, ministers or simply chief negotiators. 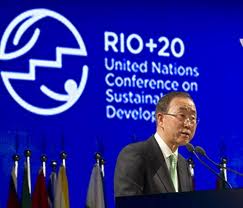