The trilogy between Manny Pacquiao and Juan Manuel Marquez is Bob Arum’s first choice to be slated in November if Pacquiao overcomes Shane Mosley in their bout on May 7.

Arum has already reserved November 12 as the schedule of the bout and it could be held at the MGM Grand in Las Vegas.

But if Pacquiao is unsuccessful in defending his WBO welterweight championship belt against Mosley, Marquez has to wait because there is a rematch clause that the rematch will take place within 6 months.

No word yet from Marquez if he will accept GBP’s proposition.

According to Arum, if Pacquiao win his fight with Mosley and Marquez is not available, most probably he would pit up Paquiao with younger opponents like Timothy Bradley. 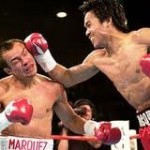