The official start of the whaling season in Norway has just started. It is one of just three countries defying the 1986 international ban on commercial whaling.

The moratorium on whaling was implemented by the International Whaling Commission (IWC) to put a stop to a hunting practice which lead to the near extinction of several whale species.

The World Society for the Protection of Animals (WSPA) and the animal welfare groups in Norway pressed the Norwegian government to put a stop this long standing cruel practice.

It has been made clear by the Norwegian government that the argument of whaling being cruel isn’t reason enough to put a stop to the hunts.

However, the WSPA and Norwegian organizations Dyrebeskyttelsen Norge and NOAH, for Dyrs Rettigheter will release new evidence which demonstrates that public support for whaling in Norway is dwindling.

The Norwegian appetite for whale meat is at an all time low and as a consequence the industry is struggling to survive.

The diminishing profitability of the industry is already acknowledged by whalers and the Norwegian government as recent years have seen declining catches and fewer people and vessels involved in the hunts. 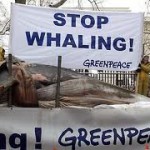