Last September, Zeta Jones said she was “furious” that doctors failed to detect the cancer earlier.

Zeta Jones, 41, made a decision to check into a “mental health facility” for a brief stay, said her publicist.

Catherine Zeta Jones has received treatment for bipolar disorder after dealing with the stress of her husband’s battle with throat cancer.

According to her publicist, she’s feeling great and looking forward to starting work this week on her two upcoming films.

It is unclear when Zeta Jones, who is from Swansea, was diagnosed with bipolar disorder or where she received treatment.

Michael Douglas, her husband, who was diagnosed with throat cancer last year, said in January that his tumour had gone and he was beating the disease. 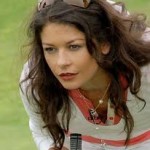