In a study of 1,162 adults with chronic lower back pain, forty eight percent in a group who underwent between 10 and 15 treatments with traditional Chinese “verum” acupuncture reported at least 1/3 less pain and an improvement in functional ability, with lasting benefit as compared to twenty seven percent of those reporting relief in the group undergoing drug and exercise therapy.

In verum acupuncture, 14 to 20 needles are inserted up to 1 1/2 inches (4 cm.) deep at “median” and other prescribed locations until the patient is said to experience a numbing sensation, called Qi.

A third group of patients underwent so called “sham” acupuncture, where needles are inserted randomly and less deeply around the painful area while avoiding the medians.

Of these, forty four percent relief for their back pain, more patients than conventional therapy and only slightly fewer than traditional acupuncture.

“The superiority of both forms of acupuncture suggests a common underlying mechanism that may act on pain generation, transmission of pain signals or processing of pain signals by the central nervous system and that is stronger than the action mechanism of conventional (drugs and exercise) therapy”, study author Dr. Michael Haake of the University of Regensburg, Bad Abbach, Germany, wrote in the Archives of Internal Medicine.

The researchers had hoped that the two acupuncture technique would identify whether the psychological or placebo effect was at work, in which patients’ positive expectations persuade them that the treatment helps. In the study, patients did not know the difference between the two techniques.

By some unknown mechanism, acupuncture may relieve pain regardless where the needles are placed, or the psychological and physical impacts combined to benefit more people in the verum acupuncture group, the study author wrote.

Between seventy and eighty five percent of people complain of back pain at some point in their lives, according to the study. “Acupuncture gives physician a promising and effective option for chronic low back pain with few adverse effects and contraindications”, the study author concluded. 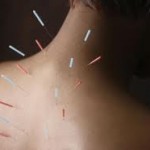