Bee Gees Barry Gibb has flown into the UK from the U.S. to join other members of the family, including his son Stephen, at a private clinic in London.

Concerned Barry wanted to be by his brother side as fears grow over his health. ‘They fear it may be the last time they’ll see Robin. His recovery and determination has been remarkable, but there’s been a turn for the worse.

Reports today have claimed that Robin’s doctors believe he has developed pneumonia since he announced he was in remission form cancer last month.

‘His body’s taken a hell of a beating. The doctors fear for him but he’s determined to battle on.’

Barry’s arrival in Britain comes after his nephew, Robin’s son, Robin John described the overwhelming moment the family learned that the Bee Gees star was in remission from cancer.

The 29-year-old, Robin John, revealed that he was sitting next to his father in his hospital bed when the doctor told them the happy news.

‘I leant over the bed and I kissed him on the forehead and just said, “I love you”,’ RJ told the Mirror.

‘Then we sat together for ages, just taking it all in and being together without saying anything.

‘It was the best news we could have hoped for. It was the most beautiful feeling and instantly life was so much better.’

Despite being admitted to hospital last week for further intestinal surgery, the 62-year-old singer has been given the all clear.

Now father and son can focus on their upcoming collaborative work for Titanic Requiem.

Together they composed the music for the Royal Philharmonic performance at Westminster Central Hall next week.

Robin is excited to get back to work following his unexpected admission to hospital last week.

Robin had been suffering repeated problems from a twisted bowel.

‘He is currently recovering in hospital and therefore, for the time being, all existing commitments prior to the Titanic Requiem concert, have had to be cancelled. 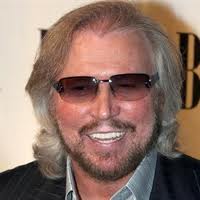