Compounding to his problem, the doctors found out that he has also developed pneumonia.

He appeared to have made a recovery from liver and colon cancer this year, but doctors believe a second tumor may be present, reported The Sun.

Robin Gibb is lying in a coma as doctors fear he only has days to live, it has been reported.

His wife Dwina, brother Barry, 65, daughter Melissa, 37, and sons Spencer, 39, and Robin-John, 29, were at his bedside at a private hospital in Chelsea, West London.

The Bee Gees star’s family were keeping a bedside vigil, praying for the 62-year-old’s survival.

‘If there is anyone you would put money on pulling through such a dire situation, it would be Robin because he is a fighter. But this is a battle he will struggle to win,’ a family friend said.

‘Our prayers are with Robin. he has kept so positive and always believed he could beat this. Sadly, it looks like he has developed pneumonia, which is very bad in his situation.’

Robin famously appeared on the Alan Titchmarsh Show looking pale and gaunt and has cancelled a handful of appearance over the past two years because of his health.

Barry Gibb earlier this week jetted into the UK from Tennessee in the U.S. to join other members of the family. 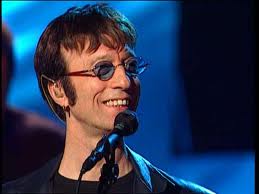