After seven years of being together Brad Pitt and Angelina Jolie have mutually decided to be officially engaged.

Their relationship started as friends when they were pit up together in the film ‘Mr. and Mrs. Smith in 2005, and it blossomed into a full blown romance after the film.

“We became friends on the film set,” Jolie said, “but the relationship began after.”
The couple, who are among Hollywood’s most widely recognized celebrities, are engaged to be married, a spokeswoman has confirmed.

However, no wedding date has yet been set, describing the engagement as ‘a promise for the future’, the spokeswoman added.

The ring made its official debut on Wednesday night, when Jolie wore it to a small, private viewing of Chinese art at the Los Angeles County Museum of Art with Pitt and son Pax.

The couple have previously resisted pressure to marry, despite numerous reports over the years that a wedding was in the offing.

Pitt said several years ago they would not wed until gay marriage was legalized in the US.

But in January he was quoted as saying that the pair were coming under pressure from their three adopted and three biological children. 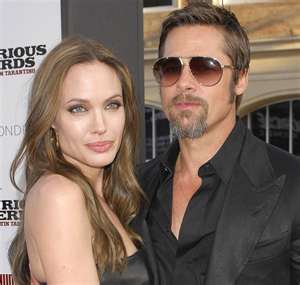