Robin Gibb has regained consciousness after more than a week in a coma.

His loved ones have rallied around him in hospital and it now seems that he is recovering.

The family have been playing him music in a bid to help wake him up. His brother Barry, a fellow member of the Bee Gees, has been singing to him in hospital.

Robin’s wife Dwina and his children have spent most of the last week by his side at the medical center in Chelsea, London, where he is being cared for.

Dwina has revealed she cried when she played him Roy Orbison’s 1962 song Crying.
She said thousands of people have been saying prayers for him every day, and thanked his fans for their support.

The singer’s website is down because of traffic volumes, with fans directed to his Facebook page, where messages of support can be left.

Dwina Gibb has been a constant source of support for the 62-year-old Robin and has been insisting to friends that the star is strong enough to pull through his current problems.

‘She will never give up, just like Robin’s attitude throughout all his recent health problems. The pair share that same fighting mentality,’ according to a source. 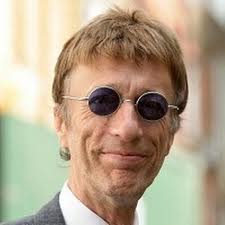