Previously, smaller fish and plankton were found with elevated levels of radiation in Japanese waters after a magnitude-9 earthquake in March 2011 triggered a tsunami that badly damaged the Fukushima Dai-ichi reactors.

But scientists did not expect the nuclear fallout to linger in huge fish that sail the world because such fish can metabolize and shed radioactive substances.

Five months after the Fukushima disaster, Fisher of Stony Brook University in New York and a team decided to test Pacific bluefin that were caught off the coast of San Diego.

To their surprise, tissue samples from all 15 tuna captured contained levels of two radioactive substances, ceisum-134 and cesium-137, that were higher than in previous catches.

To rule out the possibility that the radiation was carried by ocean currents or deposited in the sea through the atmosphere, the team also analyzed yellowfin tuna, found in the eastern Pacific, and blue-fin that migrated to Southern California before the nuclear crisis.

They found no trace of cesium-134 and only background levels of cesium-137 left over from nuclear weapons testing in the 1960s.

The results “are unequivocal. Fukushima was the source,” said Ken Buesseler of the Woods Hole Oceanographic Institution, who had no role in the research

Bluefin tuna absorbed radioactive cesium from swimming in contaminated waters and feeding on contaminated prey such as krill and squid, the scientists said.

As the predators made the journey east, they shed some of the radiation through metabolism and as they grew larger. Even so, they weren’t able to completely flush out all the contamination from their system.

The real test of how radioactivity affects tuna populations comes this summer when researchers planned to repeat the study with a larger number of samples.

Now that scientists know that bluefin tuna can transport radiation, they also want to track the movements of other migratory species including sea turtles, sharks and seabirds. 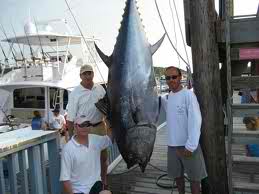