World no. 1 Novak Djokovic survived a scare of his life when the Serb went down two sets to love against Italian Andreas Seppi in the fourth round at the French Open.

Djokovic dug deep to overturn a two-set deficit for only the third time in his Grand Slam career.

“I played very badly, but I won thanks to my fighting spirit,” said Djokovic after a 25th successive Grand Slam match victory.

Djokovic’s bid is to become the first man since Rod Laver in 1969 to hold all four Grand Slam titles at the same time.

Meanwhile, world no. 3 Roger Federer overcame an unexpected challenge from David Goffin to move into the last eight with a 5-7, 7-5, 6-2, 6-4 victory over the young Belgian.

Roger Federer also had many more problems than he would have envisaged against youthful 21-yearold Belgian David Goffin, needing four sets to put him away.

The 109th-ranked Goffin, who grew up idolizing Federer, had been striving to become the first lucky loser to make the quarter-finals of a major after faltering in the qualifying event. 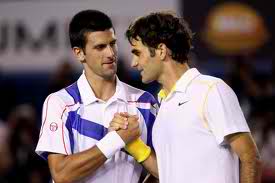