Brad Pitt and Angelina Jolie are eying for a spring marriage. They intend to make it a low profile ceremony with some family and friends invited, says a friend of the couple.

They want it totally private and by no means a showbiz event. The couple, who have been together for seven years and have six children, are discussing holding the service in Brad’s home town of Springfield, Missouri, but don’t expect a traditional celebration.

The couple have set their hearts on a spiritual ceremony to include traditions from the different countries where their children came from.

The three adopted children of the couple are: Maddox, ten, is from Cambodia; Pax, eight, is from Vietnam; and Zahara, seven, is from Ethiopia.

Their biological children are: Shiloh, five, was born in Namibia and three-year-old twins Vivienne and Knox in Nice.

Brad recently revealed that he would like to marry Angelina and said it was important for their six children to get involved.

The couple were researching weddings in the countries where their children were born.’
According to a source that the ceremony won’t be a church service but it will include all the cultures within their family.

Brangelina as the couple’s combined name are known for, started dating after meeting on the set of Mr. and Mrs. Smith in 2004.

Both were previously married. Brad to Jennifer Aniston and Angelina to actors Jonny Lee Miller and Billy Bob Thornton. 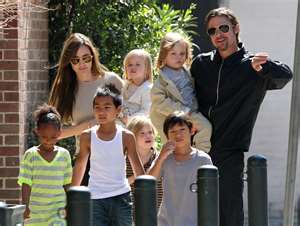