In a study of more than 900 sets of twins by scientists at King’s College London, they found that those with 100 or more moles lived on average six years longer than those with 25 or fewer.

Having lots of moles suggests you have long telomeres, which protect your DNA from wear and tear, however if telemores are shortened to the extent that the cell cannot divide anymore, then it just dies, and this could result to cellular aging.

Cellular aging, or senescence, is the process by which a cell becomes old and dies. It is due to the shortening of chromosomal telomeres to the point that the chromosome reaches a critical length.

Cellular aging is analogous to a wind up clock. If the clock stays wound, a cell becomes immortal and constantly produces new cells. If the clock winds down, the cell stops producing new cells and dies.

Telomeres shorten with time, and their length seems to indicate the speed at which our body will age.

The study found people with more than 100 moles tended to have longer telomeres.
They concluded that telomeres allow the pigmented cells that form moles to keep dividing for longer, hence, people with lots of moles may have the benefit of delayed cellular aging.

Dr. Veronique Bataille, consultant dermatologist at Hemel Hempstead General Hospital, says: ‘Moley people may have the benefit of a reduced rate of aging, and this suggests they are less likely to develop age-related diseases.’ 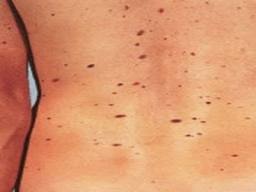