The ‘Die Hard’ star is set to become a father for the 4th time with his new wife Emma Heming, according to a U.S. report.

The 33-year-old Heming is rumored to be expecting their first child, two years after her marriage to Willis.

The Pulp Fiction actor married the underwear model, Heming in 2009, nine years after his divorce from Demi was finalized.

Moore, has also remarried to ‘Two And A Half Men’ star Ashton Kutcher, and Willis maintains and share a happy relationship with one another and they are good friends.

Moore and Kutcher, 33, were among guests who were present when Willis and Heming marry at his home on the private island of Parrot Cay, in the Turks and Caicos.

Moore and Kutcher are such good friends with Willis, thay they have often gone together for a holiday in the past.

Willis and Heming have also made several red-carpet appearances with Moore and Kutcher and Willis’s three daughters, Rumer, Scout and Tallulah.

The happy news for Bruce Willis, however, comes amid a time of turmoil for Demi Moore, after Ashton Kutcher allegedly cheated on her during a recent trip to San Diego in California.

The couple’s six-year marriage was rocked by claims that Kutcher slept with 22-year-old Sara Leal on the weekend of their wedding anniversary after a party in his hotel room. 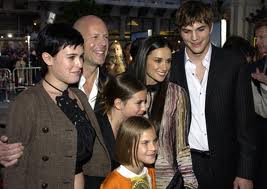