The 1985 Dire Straits’ hit single was taken off the airwaves in January after a radio listener from Newfoundland complained about Mark Knopfler’s composition using the word “faggot”.

The lyrics of the song were considered a violation of a human rights clause in Canada’s broadcasting code, in which Canadian radio stations ban the song to be played on air as its basis.

Now the decision has been overturned by the Canadian Broadcast Standards Council saying the word was used satirically by the British band.

The Council took into consideration the origin of the lyrics, which Mark Knopfler wrote after observing a shop worker complaining about the differences between his lifestyle and that of musicians he watched on MTV.

The Council ruled that “The composer’s language appears not to have had an iota of malevolent or insulting intention,” it added in its decision.

Radio stations now have the option to play the song after a ban on the song was lifted. 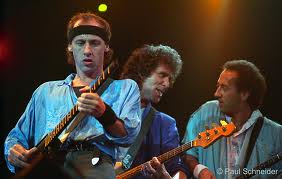