History offers a long list of corrupt regimes, dictators, despots and kings stockpiling cash in times of trouble, as well as instances of outright thievery.

In 1997, before Laurent Kabila took power in Congo, formerly called Zaire, aides close to former President Mobutu Sese Seko smuggled crates of diamonds and more than US$ 40 million dollars in cash out of the country on a jet chartered by the South African government, according to a South African newspaper.

In Haiti, President Jean Claude Duvalier and his wife, Michelle, withdrew at least US$ 33 million dollars from the country’s central bank, transferring it to foreign accounts, and may have stored some money and jewelry in a safe deposit box in Manhattan, according to court papers filed by the Haitian government after he was forced out in 1986.

The former Philippine first lady, Imelda R. Marcos, and her three children were charged with removing 22 crates of Philippine pesos from the country when they fled to Hawaii in 1986.

The Panamanian dictator, General Manuel Antonio Noriega, was reported to have stashed US$ 5.8 million dollars in denominations of 10s, 20s, 50s and 100s in a file cabinet at his home. United States authorities seized the money during the invasion of Panama in 1989.

Then, in 2003, in the hours before American bombs began falling on Baghdad, one of President Saddam Hussein’s sons, Qusay Saddam Hussein, was said by officials to have carried off nearly US$ 1 billion dollars in cash from the vaults of the country’s Central Bank.

The volume of cash was so great, some US$ 900 million dollars in American US$ 100 dollar bills and as much as US$ 100 million worth of euros, that a team of workers took two hours to load the money on three tractor trailers.

Libyan leader Colonel Muammar Qaddafi has hoarded tens of billions of US dollars in cash, Libyan dinars and possibly other currencies in banks and in Bab Al Azizia, his Tripoli compound, intelligence officials and as disclosed from the person with ties to the Libyan government.

A fund of such magnitude helps Qaddafi withstand economic sanctions and a freeze on Libyan government assets abroad. And if he flees, the hard cash is easier to carry than other assets like cars or houses. 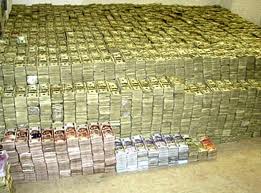