A new study offers some of the strongest evidence linking carbon emissions to coral reef damage.

The study examined corals off the coast of Papua New Guinea located near undersea seeps of carbon dioxide. The results showed that as acidity rose, coral diversity and resilience plunged.

Katharina Fabricius, a coral reef ecologist with the Australian Institute of Marine Science, says the world risks ‘profound losses of coral ecosystems’ if carbon dioxide emissions are not urgently reduced.

Coral reefs which cover merely 0.20 percent of the ocean floor but contain roughly 25 percent of the ocean’s biodiversity, provide a crucial source of protein for an estimated 500 million people, protect shorelines from tsunamis and storms, and attract tourists that sustain coastal economies.

By midcentury, virtually all reefs will be at risk, scientists fear, not just from local threats or, global warming, but from an increasingly acidified ocean. Much of the carbon dioxide released to the atmosphere ends up in the oceans, where it forms a weak acid, lowering the pH levels of the seas.

World’s coral reefs are in bad shape. This draining of color results when heat stressed corals expel the algae they rely on for food and which are responsible for their bright and beautiful hues. Death often follows in the form of coral bleached color.

One of the worst episodes of coral bleaching began last spring and summer, and affected reefs in virtually all the world’s tropical waters.

Preliminary assessments suggest that the impact will be the most damaging since the only other known global scale bleaching event in 1998 and 1999, when more than 10 percent of the world’s shallow water corals were killed by heat.

Nearly 75 percent of the world’s reefs are at risk of serious degradation, according to the World Resources Institute.

Another analysis, by the Global Coral Reef Monitoring Network, found that as much as 20 percent of the world’s reefs have been degraded beyond recognition or lost entirely.

Even as climate change and changing ocean chemistry loom as threats to reefs, many scientists say that confronting local perils such as overfishing is more important than ever. 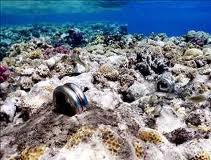