Challenger Carl Froch of Britain defeated the defending champion Lucian Bute of Canada in an impressive fashion to clinch the IBF Super-middleweight title by stopping the champion in the 5th round.

Froch revitalized his career after beating Bute, the bookmakers’ favorite to win the bout.

With the victory, the 34-year-old Froch improved to 29 wins-2 losses record with 20 knockouts.

His two previous defeats is with Denmark’s Mikkel Kessler, who beat Froch in April 2010, and to American Andre Ward when he lost his WBC title at the Super Six World Boxing Classic in December of last year.

“After the Andre Ward defeat I was very, very deflated. I was here to put right a wrong,” Froch told Sky Sports. “I was more determined than ever before.

The first two rounds saw both boxers make an impression with some clean technical shots, but it was Froch’s power that seemed to be causing his opponent the greater pain.

The third round, saw the momentum of the fight swing firmly in Froch’s favor, as the 34-year-old rained shot after shot on his opponent, who needed a combination of clinches, the ropes and the referee to stagger to the bell.

The fourth round saw Bute struggling as Froch kept on stepping forward. Again, it was the bell that saved Bute, as he took a stunning left hand in the final seconds of the round that seemed to cause him to completely lose his bearings.

A cut beneath the left eye of Bute led the referee to check although the Canadian showed real grit and courage to keep facing up to Froch.

Bute never shied away from the challenge, even as the punches kept coming, but within a minute of the 5th round Froch pinned him against the ropes and piled on with combination after combination to bring the contest to an end.

With his lopsided victory against Bute, Froch is eying for a possible rematch with Mikkel Kessler first and then Andre Ward next, who were the only two boxers who handed him his two defeats in his career. 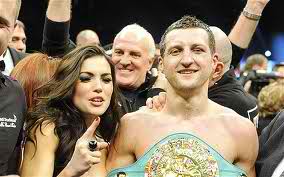