Getting enough sunshine and consuming vitamin D enriched foods could reduce stroke risk, according to a study.

The University of Hawaii team of researchers based their conclusions on a 34-year study of 7,500 middle-aged and elderly Japanese-American men living in the islands.

Dr. Gotaro Kojima, one of the researchers, said getting vitamin D from food or supplements was of greater importance for older people because synthesizing the vitamin from sunlight becomes more difficult with age.

He revealed that their ‘study confirms that eating foods rich in vitamin D might be beneficial for stroke prevention.’

American scientists have found that a lack of vitamin D, which is naturally manufactured by the skin when exposed to strong sunlight, and is also found in foods including nuts and oily fish – can raise stroke risk by more than a fifth.

They discovered that the quarter of people with the lowest vitamin D levels were at a 22 per cent higher risk of having a stroke than those in the top quarter.

Low vitamin D levels increased the chance of having the more common type of stroke, known as an ischemic stroke, where a clot becomes lodged in a brain blood vessel.

However, low levels did not affect the likelihood of the other type, called a hemorrhagic stroke, caused by a burst brain blood vessel.

Writing in Stroke, a journal of the American Heart Association, Dr. Kojima and colleagues had advised that ‘based on the results of this and other epidemiological studies, higher vitamin D intake or vitamin D supplementation may be beneficial for stroke prevention.’ 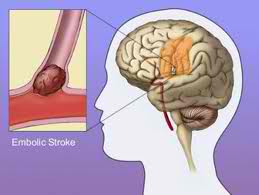