It’s the first major and eighth professional victory for Schwartzel who collects $1.44 million for the event.

The 26-year-old from South Africa, fired a closing 66, including birdies on the last four holes, to reach 14 under and beat Australian duo Jason Day (68) and Adam Scott (67) by two shots at Augusta.

Schwartzel, who was tied 30th on his debut last year, is a six-time winner on the European Tour and climbs to 11th in the world rankings.

American Tiger Woods (67), England’s Luke Donald (69), and another Australian Geoff Ogilvy (67) tied for fourth at 10 under with Argentina’s 2009 champion Angel Cabrera (71) nine under.

Northern Ireland’s Rory McIlroy, 21, who led for three rounds, collapsed on the back nine and carded a round of 80 to end four under. 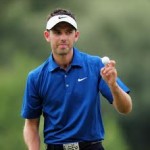