Warner Brothers formally terminated Charlie Sheen’s services in March that cited his “incapacity,” and a clause relating to “moral turpitude” and Sheen’s statements that he would no longer work with his producer Chuck Lorre.

Sheen created the stage act, titled “My Violent Torpedo of Truth: Defeat is Not an Option”, to prove to his detractors that after months of drug and alcohol rehab, an assault on his ex-wife and probation, he was still in shape to work.

Show time was supposedly to start at 8 p.m. but got off late with opening from comic Kirk Fox who untimely aborted his routine due to audience hostility.

Sheen took the stage nearly an hour late with his two girlfriends, Rachel Oberlin and Bree Olson,who help him burn a “Two and a Half Men” bowling shirt.

Sheen sporting a Detroit Tigers baseball jersey on the back had its “Warlock,” print, which fans have cheered showing their approval was one of those few moments.

Throughout the event, a giant video screen had shown Sheen’s recent TV news, interviews and verbal rant at his bosses which the actor believe gave audiences insight into his recent career turmoil.

“The usual Sheen-isms started to sound old and tired. From the men’s restroom to the expensive seats in front, it was a restless crowd, delivering plenty of jeers and only a few cheers,” wrote The Detroit Free Press in its coverage.

Sheen, who has sued Warner Bros. and Lorre for $100 million claiming he was wrongfully terminated from his job, now faces the reality of reloading his “Torpedo” or disarming it and admitting it was a lost cause. 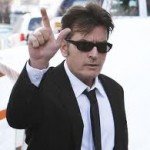