Chemotherapy can cause damage to healthy cells which triggers them to secrete a protein that enhances tumor growth and resistance to further treatment, a study revealed.

The resistance occurs when cancers that have been responding to a therapy suddenly begin to grow, meaning the cancer cells are resisting the effects of the chemotherapy.

Chemotherapy works by inhibiting reproduction of fast-dividing cells such as those found in tumors.

The scientists found that healthy cells damaged by chemotherapy secreted more protein which boosts cancer cell survival that can actually make the disease tougher to tackle.

Scientists from the Fred Hutchinson Cancer Research Center in Seattle discovered that chemotherapy can damage healthy connective tissue cells called fibroblasts, which then causes the production of a molecule that encourages prostate tumors to grow.

In lab experiments they found the cancer drug caused DNA damage which made fibroblasts pump out 30 times more of a protein than normal.

This protein encouraged prostate tumors to grow and spread into surrounding tissue, as well as to resist chemotherapy.

Professor Fran Balkwill, a Cancer Research UK expert on the microenvironment, said that this finding ties in with other research that has shown that “cancer treatments don’t just affect cancer cells, but can also target cells in and around tumors”.

“But this work confirms that healthy cells surrounding the tumor can also help the tumor to become resistant to treatment.

The next step is to find ways to target these resistance mechanisms to help make chemotherapy more effective,” Professor Balkwill added.

Rates of tumor cell reproduction have been shown to accelerate between treatments.
Blocking the treatment response of fibroblasts could improve the effectiveness of chemotherapy, say the scientists whose findings are reported in the journal Nature Medicine.

The researchers said they confirmed their findings with breast and ovarian cancer tumors. 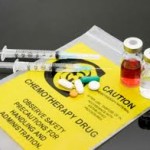