With all the din surrounding between X-Factor and Cheryl Cole, she remained silent despite Simon Cowell’s disclosure that he was protecting her.

Cole told reporters that she could care less if ever she make good in America or not. After what has been written about her, since her firing from the US X-Factor judging panel, her moving back as judge to UK X-Factor and recently a public apology from Cowell of what had happened.

Cole broke her silence by saying, “I’m actually really happy not to be on the show now. It was definitely the right decision for me. I was so badly mocked around by Simon and everyone involved. I don’t want that in my life any more. I’m better off without it.”

Before his public apology, Cowell has already anticipated that he may have lost Cole’s friendship because of the incident.

Cole has also said that it was not her dream to work in the United States, it was Cowell’s, in fact she could have cared less as she added “If I never come famous in America then that’s fine with me.”

Cheryl Cole has turned down offers to return to “Girls Aloud” but she is thrilled to be back in Britain where she feels she belongs. 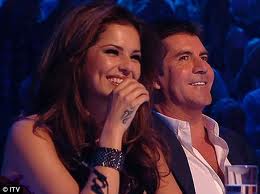