Chimpanzees can recognize when others in their group are not informed about a source of danger, research has shown.

The discovery indicates that the chimps can understand the mindset and can spot the ignorance of others and take steps to keep them informed.

The University of St Andrews scientists, who carried out the work, study primate communication and find out how the animals ‘talked to each other’ about potential threats.

The scientists placed plastic snakes into the paths of wild chimpanzees and monitored the primates’ reactions.

When individual chimps detected a snake, they sounded an alert to warn others within their group.
As other members arrived on the scene, those aware of the presence of a snake repeated the alarm call to ensure the new arrivals knew about the danger.

According to Dr. Catherine Crockford from University of St Andrews, who led the research, ‘Lots of animals give alarm calls and are more likely to give an alarm call when another animal [snake] is present.’

‘They voluntarily produce a warning call to inform audience members of a danger that they do not know about. They are less likely to inform those who already know about the danger.’ she added.

The chimps appear to be motivated to communicate relevant information to other members within the group and seem to recognize ignorance and knowledge in others.

The insight into the primates’ remarkable intelligence will be published in the journal Current Biology. 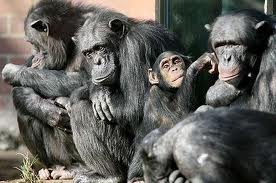