Hot flushes affect more than 75 percent of women going through the menopausal stage and it could be caused by abnormalities in the function of blood vessels, according to a research.

Under normal circumstances, if the body temperature rises, the blood vessels under the skin dilate in order to lose heat, leading to reddening of the skin and sweating.

In women with hot flushes, this can occur at the smallest provocation or seemingly for no reason at all.

Mary Ann Lumsden, Professor of Medical Education and Gynecology at the University of Glasgow, believes patients who experience severe hot flushes may actually have an abnormality in the function of the blood vessels and may also contribute to the overactive response seen in many menopausal women.

Prof. Lumsden said, ‘What’s fascinating is that it appears to be the blood vessels themselves rather than what goes on in the brain that actually causes hot flushes.’

As part of the research, the scientists treated female patients with medications known to decrease the number of hot flushes.

Some were given an anti-depressant, which is designed to boost levels of serotonin, the so-called ‘happiness hormone’.

Others were given a drug typically used to treat high blood pressure while others a Hormone Replacement Therapy (HRT) while the rest were given a placebo.

HRT was found to be the most effective treatment, with 75 per cent noting an improvement, while the anti depressant drug improved flushing in over 60 per cent of patients, with the majority of those prescribed it wishing to continue with the drug. Drugs used to treat hypertension only worked in 40 per cent of the women.

However, if a patient suddenly stops taking the ant depressant in their treatment they can experience significant withdrawal symptoms including anxiety, low mood, insomnia and nausea.

The researchers also found that patients who are prone to hot flushes have more risk factors for heart disease. 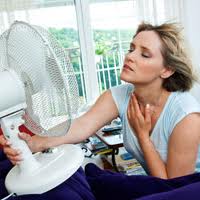