The 2008 scandal where milk produced in China was tainted with melamine led to a worldwide recall of Chinese dairy products and was a major embarrassment for the country’s Communist leadership.

China’s General Administration of Quality Supervision, Inspection and Quarantine had ordered 533 dairies to cease operations with government to further strengthen the supervision of dairy firms, stressing that “production without authorization will be severely punished”.

The announcement comes as China tries to shore up its milk industry after a baby milk health scandal where six babies died and another 300,000 were made ill by drinking infant formula tainted with melamine in 2008.

The industrial chemical was added to dairy products to make them seem high in protein.

Nearly half of China’s 1,176 dairies are being shut down after failing to obtain new licenses, the country’s quality inspection agency says. 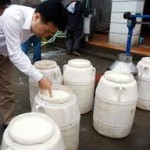