The Serb will look to further close the gap on Nadal at the top of the standings as the Spaniard has a huge number of ranking points to defend, having won all the major clay tournaments last year.

It is the best start to a year in men’s tennis since Ivan Lendl began with 25 consecutive victories in 1986.

Djokovic and Nadal now head to Europe for the start of the clay-court season.

Whether Djokovic is ready to surpass Nadal on clay remains to be seen but after defeating his closest rival recently, there is no doubt he is the man to beat right now. 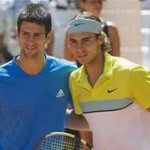