China has claimed historical sovereignty over the disputed Spratly group of islands in the South China Sea.

It is believed that the disputed area is potentially rich in oil and gas. Among the claimants of the area Vietnam, the Philippines, Taiwan, Malaysia and Brunei.

The territorial claims of the disputed islands will be discussed at the two key east Asian summits in Indonesia this week but China will not be ready to make concession of the disputed China Sea.

The United States along with Japan have pressured China to resolve the complicated issue of sovereignty which has been brought up again this year that end up with tension of other claimants of the region.

Chinese Premier Wen Jiabao is attending first a summit with the Association of Southeast Asian Nations (ASEAN), followed by the East Asia Summit where both will be held in Bali, Indonesia on November 19.

Among the attendees of the East Asia Summit are senior officials or leaders from Southeast Asia, China, Japan, India, Australia, South Korea and New Zealand. U.S. President Barack Obama is due to attend this year.

The issue of the South China Sea will most likely to be discussed during the two summits, according to diplomats.

Regional claimants try to diffuse the tension after a series of disputes this year, including Chinese patrol boats threatened to ram a Philippine-contracted survey ship in the Reed Bank in March.

China insists the dispute can only be resolved by bilateral talks between the parties directly concerned and dismissed any interference and involvement by the United States and Japan of said issue.

With U.S. bases to the east in Japan and South Korea, China fears its southern flank could be threatened if the United States stepped up its naval presence in the South China Sea, even if, as Washington says, it only wants to protect freedom of navigation. 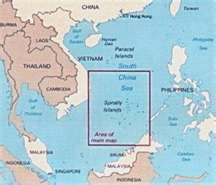