The weather may not always be suitable to cocoa producers in West Africa but until recently it was at least expected to happen.

Scientists say climate change may be altering these once reliable weather patterns in West Africa, which is the source of some two thirds of the world’s cocoa.

Good cocoa production is dependent on good weather condition with temperature ranging from 22 and 29 degrees Celsius.

Lately, weather has become hotter and more erratic, according to farmers and agronomists in the region. Temperatures often reach 32 degrees Celsius and rains come irregularly it’s either too early or too late. Dry spells are harsher or the skies are overcast when they’re meant to be sunny.

That wouldn’t matter if the cocoa tree was less sensitive, but yields suffer without the right mix of rain and sun at the appropriate times.

“Production has definitely gone down. Because of the heat, the trees die. I used to get almost two tonnes out of my three hectares, now I’m lucky if I get a tonne,” said 71-year old cocoa planter Souleymane Drabre on his three hectare plantation in Ivory Coast, a country feeding a third of the world market.

Survival in a warmer world for the millions of smallholders who depend on cocoa may depend on moving to higher, cooler places or breeding new varieties, experts say.

A report by the International Center for Tropical Agriculture (CIAT), an agricultural research institute in southwest Colombia, a rise of 2.3 degrees Celsius by 2050, possible within consensus forecasts by climatologists, would be enough to hurt production ‘quite seriously’ in lowland regions, it said.

The Organization for Economic Cooperation and Development (OECD) said last week global average temperatures could rise by 3-6 degrees Celsius by the end of the century if governments fail to contain greenhouse gas emissions, outstripping the internationally agreed target of 2 degrees.

To address the issue of greenhouse gases, delegates from nearly 200 countries will meet in South Africa from November 28 for climate talks towards a broader deal on how to cut greenhouse gas emissions to fight climate change. 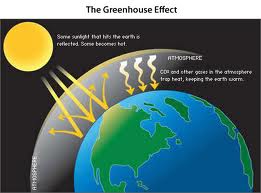