Brain shrinkage, that causes a declining function and memory loss had been thought to be irreversible.

Scientists in Canada have raised a challenging prospect, that is reversing Alzheimer’s disease.

In Alzheimer’s, the hippocampus is one of the first regions to shrink. It is the memory hub converting short-term memory to long-term memory. Damage leads to some of the early symptoms of Alzheimer’s, memory loss and disorientation.

By late stage Alzheimer’s brain cells are dead or dying across the whole of the brain.

To reverse the shrinking brain in Alzheimer’s, they used a technique known as deep brain stimulation by applying electricity directly to regions of the brain.

The procedure is all done under a local anesthetic. An MRI scan identifies the target within the brain. The head is held in a fixed position, a small region of the brain is exposed and thin electrodes are positioned next to the region of the brain to be stimulated.

The electrodes are hooked up to a battery which is implanted under the skin next to the collar bone.

Lead researcher Prof Andres Lozano said you would expect the hippocampus to shrink by five per cent on average in a year in patients with Alzheimer’s.

“This is the first time that brain stimulation in a human being has been shown to grow an area of your brain.

When it came to the symptoms he said: “In one of the patients, he is better after a year’s stimulation than when he started, so his Alzheimer’s has reversed if you like.”

Prof Stein said he was “very encouraged” by the early findings, but the key would be showing “whether their memory improved”.

Dr Marie Janson, from Alzheimer’s Research UK, said “it would be very significant” if you could reverse brain shrinkage and that “if you could delay the onset of Alzheimer’s for five years you would halve the number of people affected.”

To test whether this is really working, rather than being a fluke result, the researchers are going to perform a larger trial.

Prof. Lozano says that for now: “a word of caution is appropriate, these are very early days and a very small number of patients are involved.”

Starting in April they are aiming to enroll around 50 patients with mild Alzheimer’s. All will be implanted with electrodes, but they will be turned on in only half of them. The researchers will then see if there is any difference in the hippocampus between the two groups.

They are specifically looking at patients with mild Alzheimer’s because of the six patients with the condition, it was only the two with the mildest symptoms that improved.

One theory they are considering is that after a certain level of damage patients reach a point of no return. 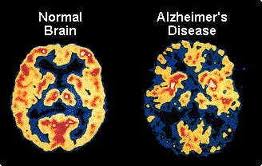