People have two types of fat, white fat which stores energy and accumulates from not exercising enough, and brown fat which burns it, which is highly efficient at dissipating stored energy as heat.

Newborns have a relative abundance of brown fat, as protection against exposure to cold temperatures.

As people get older, however, the body becomes more adept at regulating temperature, so brown-fat stores shrink and white fat starts to emerge. In adults, however, almost all excess energy is stored as white fat.

Identifying the presence of brown fat is one thing, but activating it to burn more glucose is another.

In a study in the New England Journal of Medicine, researchers found that leaner people tended to have more brown-fat deposits than overweight or obese individuals.

Brown fat as opposed to the more familiar white fat that hangs over belt buckles and swings from the backs of arms, confirm for the first time that healthy adults have stores of this adipose tissue, which researchers hope to study further as a potential new weight-loss treatment.

Brown fat may indeed shift the balance of calorie intake and expenditure allowing a person to burn more calories with the same amount of consumption without the chore of going to the gym or sweating through a workout.

Scientists have taken a leap forward in the battle against the bulge by discovering how to turn fat into muscle.

Researchers have discovered a switch that can turn white fat into brown, which would speed up a person’s metabolism and tackle obesity.

The discovery could prove a milestone in tackling diabetes and obesity, which costs the National Health Service (NHS) in the UK an estimated US$ 5.50 billion (£4 billion) a year, a financial toll which is rising every year.

White fat can be ‘browned’ with a class of drugs called thiazolidazines (TZDs), by activating a cell called ppar-gamma, which increase the body’s sensitivity to insulin but doctors have steered clear of using these drugs because of their harmful side effects to humans.

By studying mice and human fat tissue, scientists at Columbia University Medical Center in America found that white fat is converted into brown fat when the activity of enzymes called sirtuins increases.

Experts have turned white fat into brown fat by mimicking enzymes called sirtuins.
The researchers had previously shown in mice that when sirtuin activity increases, so does metabolic activity.

In the present study, they found that sirtuins boost metabolism by promoting the browning of white fat.

Sirtuins work by severing the chemical bonds between acetyl groups and proteins, a process known as deacetylation.

To confirm that the deacetylation of ppar-gamma is crucial to the browning of fat, the researchers created a mutant version of ppar-gamma, in effect mimicking the actions of sirtuins, The mutation promoted the development of brown fat-like qualities in white fat.

The finding opens up the possibility to inventing new ways to tackle diabetes and obesity, one of the biggest threat to health in the UK claiming up to 30,000 lives a year. 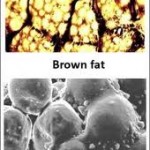