For decades mountain lions or cougars were seen as a threat to livestock and humans and many States paid a bounty to hunters for killing them.

Their habitats were restricted to the areas around the Black Hills of Dakota. But in the 1960s and 70s the animals were reclassified as managed game species, so hunting was limited and numbers started to grow.

Now, cougars are again spreading across the Midwest a century after the generally reclusive predators were hunted to near extinction in much of the region, according to a new study.

The study sorts through various reported sightings and affixes a number to those it could confirm, which is significant because no government agency tracks the number of large cats across the country.

And wildlife officials for years have said it’s unclear how many of the animals may be in the Midwest, where they are not federally protected and, in some states, are subject to being hunted.

The big cats are moving far outside their heartland territory in the Midwest, increasing the chances of encounters with humans.

One male cougar from South Dakota was found to have traveled 1,800 miles through three states before ending up in Connecticut, where it was hit and killed by a vehicle.

Cougars are known to be largely secretive and mostly keep to riverbanks and wooded areas, usually avoiding humans while feeding on deer, turkeys and raccoons.

Michelle LaRue, from the University of Minnesota, who led a study on the spread of mountain lions, said: ‘The question now is how the public will respond after living without large carnivores for a century.

She said: ‘Our study took in over 1.2million square miles of territory, confirming the presence of cougars from Texas, Arkansas and Nebraska, to the Canadian provinces of Ontario and Manitoba.’

The findings, published in the Journal of Wildlife Management, cited 178 confirmed reports of cougars in the Midwest. 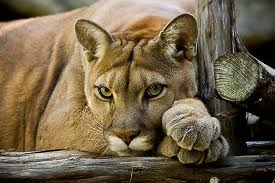